An older home in Mission Viejo gets and old shower stall removed and new material installations and custom shower design. 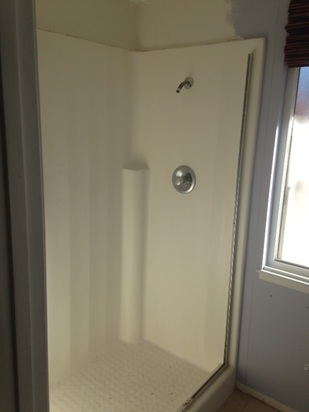 After removal of the old fiberglass enclosure, there was a few unfortunate discoveries. The exterior walls had absolutely no insulation, amateur wiring/unprotected wiring was within hands reach of the shower stall, the drain line was broken/corroded and clogged full of dirt and drywall at the toilet area had evidence of mold/mildew.
The concrete slab has to be jack hammered out to expose the pipe for proper repairs to the drain line. An addition setback and/or concern is that we really don 't know how much of the cast iron drain line is corroded/deteriorated.....
I had to keep jack hammering the concrete away until we found the broken drain connects and that the pipe was accessible/repairable. Hoping that the pipe repair was not going to affect the adjoining bathroom next door.
Dirt was removed the rest of the way to make room for repair/replacement of the old cracked/deteriorated drain pipes. Drain pipes replaced and new shower drain installed as well. Next, the supply pipes are not located in the wall, to accommodate the new tile wall design, so they will be replaced and re-routed as well.
Shower partition walls being constructed, plumbing relocated, necessary blocking provided, electrical repaired/portions removed.
Concrete slab still needs to be poured, before the pan can be built, as well as insulation needed and  a little more plumbing too.
The custom shower is taking shape with a new pan liner installed (that still needs the slightly pitched cement top layer). The partition half walls have shampoo "cubbies", most of the glass-crete wall board is installed. A bench is going to be installed in the shower, as well. All of the unsafe/illegal wiring next to the shower was removed. and a new ceiling exhaust fan/heater/light was installed over the toilet.
The shower pan and walls are complete and ready for tiling! The shower has nice shampoo cubbies and a seat/bench, as well. The owner is going to be doing the tiling, now that the shower is water tight. She told me that she plans to do a nice mosaic is the middle of the back wall, I can't wait to see it. After the tiling is complete I'll be back to "set-finish". meaning install the fixtures/trim pieces.
It's been a while since I've been here to work on this shower, but "Karen" did a great job with her tile work! I got to install the finished to the fixtures, toilet, remove the vanity counter top, mirror and fix. repair the water pressure, fix  the exterior yard gate.
She'll finally get to use her shower and toilet. Karen really took extra tile to make sure that all the tiles lined up well and everything was plumb and level.
The exterior yard/driveway vinyl gate fell over after I arrived to the house, so that was my project for the end of the day.

Things just aren't super easy. Although it only took a couple hours to fix, it took my rotary jack hammer drill, impact, angle grinder, salz-all, cordless and 1/2' drills too, plus basic tools LOL.
All fixed :)