A home in Capistrano Beach had water damage to the interior, due to leakage. The area was tested to be ACTIVELY LEAKING/WET, at the time of repair. So, the Interior of the suspect window trim, jamb, and baseboards were removed, including portions of the exterior trim of the suspect window.
The exterior of the window was caulked, including the sliding glass door and adjoining window as well. After the trim was re-attached, caulked and nail holes were filled, the trim was re-painted as necessary (the suspect window, adjoining window and sliding glass door trim, as well)
The interior was also re-assembled with new mouldings, sealed, nail holes filled, caulked were necessary, primed and painted to match.

The same home had water damage to the baseboards near the outside of the shower door. The baseboards were obviously damaged, but tested to be DRY, by use of water detection equipment. It was observed that the wall mounted shower head was aimed straight for the shower door, so it was moved/adjusted to point toward the fixed/sealed glass panel. The baseboard in this area was also removed and replaced as necessary, included primed, nail holes filled, caulked, and painted to match existed. 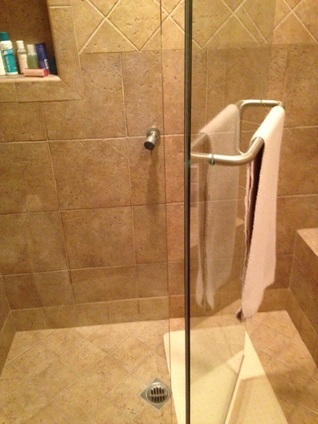